On 27 August 1941, Ida Catherine (Patton) Ardinger passed away. She was my 2nd great-grandmother.

Born on 20 November 1867, she was the daughter of John Patton and Esther Lewis.

Other than her birth, nothing is known about Ida’s childhood. No record of her family can be found from that time period. Perhaps they were residing in a different state or a different country during that time?

On 23 March 1885, Ida and James welcomed their first child, a daughter named Mary Isabelle Ardinger, who was born in Williamsport, Washington County, Maryland.

Then, on the morning of 5 September 1896, Ida Catherine’s brother John W. Patton, who captained his own boat on the C&O Canal, fell into the water, was knocked unconscious, and drowned. Besides his sister Ida Catherine and their mother, John W. Ardinger left behind his wife and four young children.

A year after this tragedy, Ida Catherine and James Ardinger welcomed a daughter, Nettie Aurelia Arranger, on 2 February 1897, in Williamsport, Washington County, Maryland.

Ida and James’ final child was a daughter, Thelma Catherine Ardinger (my great-grandmother), who was born 16 October 1901, in Williamsport, Washington County, Maryland.

On 25 April 1910, Ida and James Ardinger were living on Vermont Street, Williamsport, Washington County, Maryland. Residing with them were their children Esther, Nettie, Kenneth, and Thelma. In 1910, James Eugene Ardinger worked as a wagon driver.

Although she is not found in the 1920 Census, we do know that in the second half of her life, Ida Catherine Ardinger was a member of the Williamsport Methodist Church and of the Sons and Daughters of Liberty Lodge.

However, in 1930, Ida Catherine once again appears in the census. On 13 April 1930, Ida was working as a live-in housekeeper, residing with David C. Whipp, a widower, and his children in Hagerstown, Washington County, Maryland. She claimed to be a widow. Meanwhile, on 15 April 1930, James Eugene Ardinger was living at 320 Vermont Street, Williamsport, Washington County, Maryland. James was living alone and also claimed to be a widower.

On 2 May 1940, Ida Catherine Ardinger was back in Williamsport, Washington County, Maryland—this time on 118 West Salisbury Street. She was living alone, was retired, and claimed to be widowed. A month earlier, on 1 April 1940, James Eugene Ardinger, also retired, was residing around the corner (about 312 feet), at 10 South Vermont Street, Williamsport, Washington County, Maryland. In the census, he claimed to be single. A housekeeper, Mary Ramer, also lived in the home. 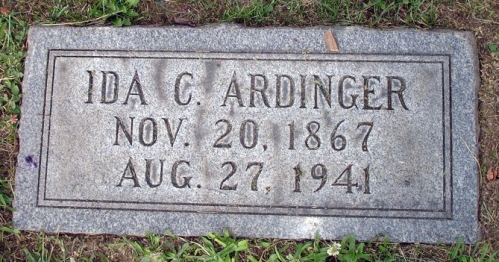