On this day, 5 September, in the year 1692, Joseph Holway passed away. He was my 10th great-grandfather.

Born circa 1636, in Barnstable County, Massachusetts, Joseph Holway was the eldest child of Joseph Holway, a millwright, and Rose Allen. 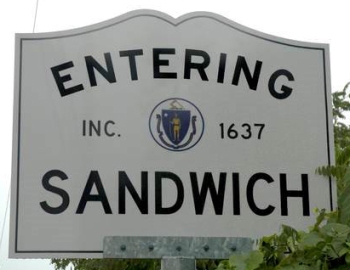 Sandwich was first settled by the English in 1637 by a group from Saugus with the permission of the Plymouth Colony. One of the most prominent founders was Edmund Freeman, an Assistant Governor of Plymouth Colony under Governor William Bradford. The town, named after the seaport of Sandwich, located in Kent, England, was incorporated in 1639 and is the oldest town on Cape Cod. Approximately sixty families, including the Holways, were the first settlers in Sandwich.

In 1642, the Holway family welcomed Sarah J. Holway to the fold. A year later, 1643, she was followed by another girl, Mary Holway. In 1644, a third girl, Experience Holway, joined the family. The final child in the Holway family was Hopestill Holway, who was born in 1646.

Left with a son and four young daughters, Rose (Allen) Holway needed to marry again. On 16 May 1648, she wed William Newland, thereby ensuring that she and her children were provided for.

Sometime after his father’s death, Joseph Holway took his place in the community, serving on the same town committee, the one in charge of dividing common townlands.

On 11 May 1657, ten years after his father’s death, Joseph Holway married Mary Hull in Sandwich, Barnstable County, Massachusetts. She was the daughter of Captain Tristram Hull and his wife Blanche.

Many sources claim that the Holways were members of the Religious Society of Friends (Quakers). However, if they were all Quakers, they would not have been such until at least 1657, when a man by the name of Christopher Holder arrived in Sandwich from England. Preaching the inner light as the source from God of personal and societal inspiration, Christopher Holder converted many Sandwich residents to the new faith, and the first Quaker Meetings occurred in Sandwich as early as 1657.

Although Sandwich was under the thumb of Plymouth Colony and though Quakers of that community, including Rose (Allen) Holway Newland and her second husband, were fined and persecuted for their beliefs, the movement continued to add new converts. In 1658, the court fined the Newlands for the following reasons:

In 1660, William Newland was fined five pounds for “entertaining a strange Quaker called Wenlocke Christopherson.” Then, in October 1660, the court again fined the Newlands for being at Quaker meetings.

Circa 1662, Joseph and Mary Holway welcomed a son, Joseph.

On 3 May 1670, Joseph Holway served as the town constable.

In 1673, John Smith was chosen as Sandwich’s second Puritan minister, replacing the town’s first minister, William Leveridge, who left his post approximately 20 years earlier circa 1654. In agreeing to the appointment, Reverend Smith required that he never be asked to “lift a hand” against the Quakers. Thus, the official persecution of the Sandwich Quakers was ended.

Circa 1673, Joseph and Mary Holway welcomed a daughter, Rose Holway (my 9th great-grandmother).

Other known children of Joseph and Mary (Hull) Holway were Benjamin, Elizabeth, John, and Samuel. Their exact birth dates are not known; however, all were born in Sandwich, Barnstable County, Massachusetts.

Agreed upon between each and every of us viz Joseph Holley, John Holley, Mary Holley, Hannah Holley, and Rose Holley that as to ye Settlement of ye Estate both Reall and personall that was our Honnoured fathers … Joseph Holley aforesd Shall have for his double portion … our Elder sister Sarah Allen … Said Mary Holley his next Sister … above Named two other Sisters Hannah and Rose … his youngest Sister Elizabeth … when shee Shall Come of Age … sd John Holley … our younger Brethern Samuel and Benjamin Holley … when they Shall Come of age … 5 September 1692. Inventory of Joseph Holley deceased.