250th Anniversary of the Mason-Dixon Line 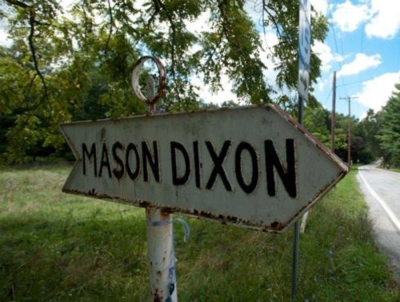 Starting in the early 1700s, my Noel-Ardinger and Taylor-Thomas lines and my spouse’s Spangler family settled in southern Pennsylvania and northern Maryland: Adams, Cumberland, Franklin, Lancaster, and York Counties, Pennsylvania and Carroll, Frederick, and Washington Counties, Maryland—on or near the Mason-Dixon line.

The Mason-Dixon line came about because the Colonies of Maryland and Pennsylvania both claimed the land between the 39th and 40th parallels according to the charters granted to each. Maryland had been granted the territory north of the Potomac River up to the 40th parallel. Pennsylvania’s grant defined the colony’s southern boundary as following a 12-mile circle counter-clockwise from the Delaware River until it hit “the beginning of the 40th degree of northern latitude.” From there, the boundary was to follow the 40th parallel due west for five degrees of longitude. But the 40th parallel did not intersect the 12-mile circle, instead it was significantly farther north. Thus, Pennsylvania’s southern boundary, as defined in its charter, was unclear and contentious, placing Philadelphia, Pennsylvania’s major city, within Maryland’s domain.

In 1732, Proprietary Governor of Maryland Charles Calvert, 5th Baron Baltimore, signed an agreement with the sons of William Penn establishing the border somewhere between the areas of contention and renouncing the Calvert family’s claim to Delaware. However, soon thereafter, Lord Baltimore claimed that the document he signed did not contain the terms to which he had conceded; therefore, he refused to abide by the terms of that agreement.

In the mid-1730s, violence erupted between the Maryland and Pennsylvanian settlers; this border conflict became known as Cresap’s War.

In 1763, as part of the settlement, the Penns and Calverts commissioned English Astronomer Charles Mason and Surveyor Jeremiah Dixon to confirm the newly established boundaries between Pennsylvania, Maryland, Delaware, and Virginia. The Calverts and the Penns paid Mason and Dixon 1 pound, 1 shilling per day to have 244 miles surveyed. (By the end of the project, a total of £3,512/9 s—3,512 pounds, 9 shillings—was paid.)

The most difficult task for Mason and Dixon was determining the tangent line, as they needed to confirm the accuracy of the transpeninsular line midpoint and the 12-mile circle, determine the tangent point along the circle, and survey and mark the border. (Unfortunately, this left a small wedge of land which was disputed between Delaware and Pennsylvania; this land remained in contention until 1921.)

In April 1765, Mason and Dixon began their survey of the Maryland-Pennsylvania line, an east-west border with an approximate mean latitude of 39°43’ 20” N.

The Mason-Dixon line was defined by marker stones every mile with crown stones every five miles. These stones were quarried in England. The marker stones on engraved with an M on the Maryland side and a P on the Pennsylvania/Delaware sides. The crown stones were marked with the Calvert coats of arms on the Maryland side and the Penn coat of arms on the Pennsylvania side.

After Pennsylvania abolished slavery in 1781, the western part of the Mason-Dixon line and the Ohio River became a border between free and slave states, although Delaware remained a slave state.

The line has been resurveyed three times since the original survey (1849, 1900, and during the 1960s) with very few changes to the original findings by Mason and Dixon. Full details about the 1900 resurvey can be found here.

4 thoughts on “250th Anniversary of the Mason-Dixon Line”

The Official Blog of P.D.Blake