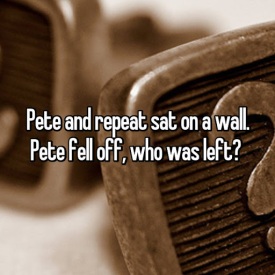 As children, my sisters and I really, really loved riddles. The sillier and/or more annoying they were, the better. One of our favorites was this old standby:

After a while, this riddle would start to grate on my mom’s last nerve:

“Girls, if you know what’s good for you, I highly suggest that both Pete and Repeat get off that $!#@ wall… NOW!”

Even though it has been decades since I have thought of this riddle, it suddenly popped into my head when I saw this week’s 52 Ancestors in 52 Weeks’ writing prompt: Same Name. (I’m not quite sure why…)

Then, there is the same name grandfather-father-son trio of Ezekiel Boring, Rev. Ezekiel Boring, and Ezekiel B. Boring (my spouse’s brother-in-law’s 6th, 5th, and 4th great-grandfathers). (It’s as if the third one is being advised to live up to his surname, doncha think?) 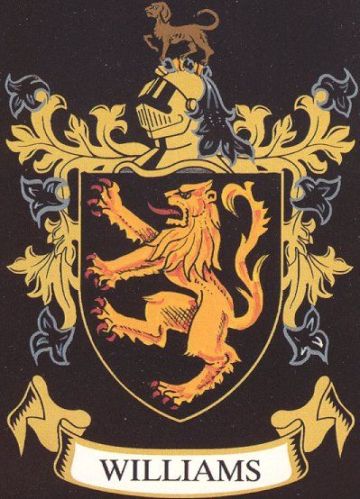 But for this post, I will be telling the life story of William Williams (my spouse’s 5th great-grandfather), who was born in Chester County, Pennsylvania on 5 December 1749, to Welsh Quakers William and Ellin Williams (yep, another William Williams).

At some point in his mid- to late-teens, William Williams married a woman by the name of Mary Margaret (surname unknown). Together, they would have eight known children: seven sons and one daughter.

Their first child was son George Williams, who arrived on 7 July 1766, at the couple’s Chester County home.

Son Job Williams would come along three years later in 1769.

The next son was another William Williams, this one born in 1771.

At some point after the birth of their third child, William and Mary Margaret Williams left Chester County, eventually settling along Centre County’s Spring Creek near the Bald Eagle Mountain (at that time, this area was part of Northumberland County). Their homestead was on the Pennsylvania frontier, a remote area that was both magnificent and minacious. Even as settlers beheld the beauty of the hills and dales, they warily watched those same peaks and valleys for marauders and war parties. In the event of an attack, the closest assistance, other than other settlers, would have been the soldiers at Potter’s Fort. Erected in 1777 by Colonel James Potter, this fort was situated on an elevation north of modern-day Centre Hall and about nine miles southeast of present-day Bellefonte.

Around the time that the plans for Potter’s Fort were being conceived, so was daughter Jane Williams (my spouse’s 4th great-grandmother), who was welcomed to the Williams family on 12 September 1776.

Three more sons, David, John, and Mark, rounded out the family, although their birth years are unknown.

Time passed. William Williams’ children eventually grew up and moved on. Sons George and Jesse married and built their homes near Port Matilda, Centre County, Pennsylvania. Less than ten miles away, sons David, Job, and William, Jr. settled in nearby Julian, while sons John and Mark left the state, relocating to the Illinois wilderness.

In 1790, the first U.S. Census was taken. Even residents of the former frontier were enumerated. In 1790, there were two William Williams’ families residing in Northumberland County. One family had three free white males age 16 and older and two free white females. The other family had three free white males age 16 and older, two free white males under the age of 16, and two free white females. Either family could have been our William William’s family. Perhaps the other was his own son William and family? It is possible that the younger William, who was about 19 years old, would have been wed with young children. Maybe siblings or in-laws lived with the young family? It is impossible to tell if either of these families belongs to either young William or even his father, although I believe that it is fair to guess that one of these families is probably that of William Williams, the elder.

On 3 February 1796, daughter Jane Williams married Joseph Williams (no relation as far as I can tell). The couple stayed in Centre County, building a life and a family. Through them alone, William Williams became a grandfather 14 times over.

On February 13, 1800, Centre County, named for its geographic placement in the middle of the state, was created. Suddenly, William Williams was a resident of a new county, without even having to move. The early settlements at Bald Eagle’s Nest and Penns Valley started in 1770 were flourishing by 1784, when iron ore was discovered in the region.

No census records for the elder William Williams can be found in either the 1820 Census or the 1830 Census, so it is highly likely that at least William Sr. was residing with one of his children during those years.

William Williams appeared in the records one more time in 1835, when, at the age of 86, he passed away in Centre County, Pennsylvania.