It is Week 12 in the 52 Ancestors in 52 Weeks writing challenge. This week’s writing prompt, Popular, was a tough one. Maybe it’s because the concept is so foreign to me personally that I had difficulty finding a “popular” ancestor in my tree. I did, however, identify several unpopular ones, including my 21st great-grandfather, Edmund of Woodstock. As you will read, Edmund was not particularly well-liked by his contemporaries. 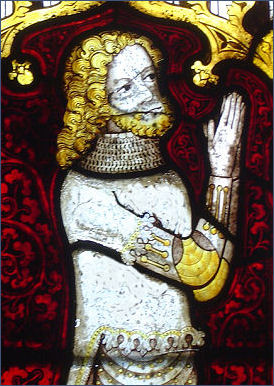 Three months later, on 7 July 1307, just a month before Edmund’s sixth birthday, Edward I passed away.

Upon their father’s death, Edmund’s elder half-brother Edward II succeeded to the throne. Although it was their father’s wish that Edmund would receive the earldom of Cornwall, Edward II instead granted the earldom to his favorite, Piers Gaveston. According to the chronicle Vita Edwardi Secundi, many considered this a grave insult to the king’s younger brother.

Edward II’s close relationship with Piers Gaveston continued to be a source of conflict at court. Some of the nobles who hated the influence Piers Gaveston had on the king decided to take matters into their own hands. On 19 June 1312, Piers Gaveston was stabbed and beheaded by some of these disgruntled nobles, and his body was left on the road. When Edward II learned about Piers’ murder, his anger was immense, and England was nearly brought to the brink of civil war.

Meanwhile, Edward II took steps to provide his half-brother with an income. In 1315, Edward II granted Edmund 2,000 marks per annum.

As Edmund came of age, he became an important member of the circle around his brother. In 1318, in the hopes of brokering peace between Edward II and the rebelling nobles, the Treaty of Leake was drafted. Edmund was one of the witnesses to sign this treaty.

In the spring of 1320, Edmund took part in a diplomatic trip to Avignon, France to see Pope John XXII Edward II wished to be released from his oath to uphold the Ordinances, a set of restrictions imposed on royal authority by the baronage. Edmund then joined Edward II in Amiens, France to shore up relations with his father-in-law Philip IV.

The political conflict started by Piers Galveston’s execution continued with resentment towards Edward II’s new favorites, Hugh Despenser the Younger (my two-times 22nd great-grandfather) and Hugh Despenser the Elder (my two-times 23rd great-grandfather). Unfortunately, this discontent escalated into full-scale rebellion from 1321 to 1322. Edmund played a key role in helping suppress the rebellion.

During that same time, Bartholomew de Badlesmere, steward of the royal household (as well as my 23rd and 24th great-grandfather), sided with the rebels. Consequently, on 16 June 1321, Edmund was made the Lord Warden of the Cinque Ports.

On 16 June 1321, when Bartholomew de Badlesmere, steward of the royal household (as well as my 23rd and 24th great-grandfather), defected to the opposition, Edmund was made the Lord Warden of the Cinque Ports. At parliament in July 1321, Edmund agreed to exile the Despensers; however, he later reconsidered and was a part of the council that ended their exile in November 1321.

In October 1321, Edmund was part of the siege of Leeds Castle, held by Bartholomew de Badlesmere. After Badlesmere’s surrender, the army advanced on the Welsh Marches, where Roger de Mortimer (my 21st and two-times 23rd great-grandfather) and other marcher barons were revolting. Mortimer surrendered without a fight, and Edmund and the king’s army went after the rebel leader, Thomas of Lancaster. Lancaster’s castle at Pontefract was seized, and on 17 March 1322, Lancaster was captured after his defeat at the Battle of Boroughbridge. (My 23rd great-grandfather Humphrey de Bohun died at that battle against Edward II’s army.) Edmund served on the jury that charged Thomas de Lancaster with treason and sentenced him to death.

With the Welsh uprising relatively subdued, one would think that Edward II would not be eager to engage in armed conflict again, but this was not the case. In August 1322, Edward II led his army to Scotland to take on Robert the Bruce (my 22nd great-grandfather). Edmund accompanied the troops. The English were routed by the Scots at the Battle of Old Byland on 14 October 1322. To avoid capture, Edward II and Edmund were forced to flee the battlefield, heading to York.

In January 1323, Edmund was charged with wresting Wallingford Castle from Maurice de Berkeley (my 23rd great-grandfather). For his service, Edmund was rewarded with Welsh holdings.

That same month, Andrew Harclay, earl of Carlisle and warden of the Marches, signed a peace treaty with the Scots without royal sanction in January 1323. Consequently, he was arrested and tried for treason. Edmund was one of the juries who passed judgment on Harclay, who was found guilty and sentenced to be hanged, drawn, and quartered.

Afterward, Edmund was given responsibilities for the defense of the northern border. On 30 May 1323, Edmund served on the council that agreed to a 13-year truce with Scotland.

In April 1324, Edmund and Alexander de Bicknor, Archbishop of Dublin, were sent to France on a diplomatic mission. When diplomacy failed, Edmund was appointed Edward’s lieutenant in Aquitaine on 20 July 1324. Because reinforcements never arrived from England, the English lands were quickly overrun by the French, and Edmund was besieged at La Réole, holding out until 22 September 1324, when he was forced to surrender and agree to a six-month truce.

About a year later, in late 1325, Edmund of Woodstock married Margaret Wake, daughter of John Wake and Joan de Fiennes and great-great-granddaughter of Llywelyn ap Iorwerth and Joan of Wales.

In the fall of 1325, Edmund was sent to attend the English queen, Isabella of France, who was serving as an emissary to the French court. While there, opposition to Edward II abounded, with English exiles fanning the flames of discord. One of these exiled subjects was Roger Mortimer (my 21st, two-times 22nd, and two-times 23rd great-grandfather), a powerful Marcher lord who had been imprisoned by Edward II in the Tower of London because of his disdain of the Despensers. After he escaped the Tower, Mortimer took up residence in Paris for several years. It was there that Isabella of France and Edmund came under his influence, mostly because they too were not fond of the Despensers’ influence over the king. When Edward II ordered both Isabella and Edmund to return to London, they refused. Consequently, Edmund’s lands were confiscated by the English crown in March 1326.

In September 1326, Isabella and Mortimer invaded England with mercenary soldiers; Edmund took part in the invasion. The invasion was supported by many English nobles, including Edmund’s brother Thomas and Henry, Earl of Lancaster. Edmund took part in the trials of the two Despensers, as well as the council transferring power to young Prince Edward, who was crowned Edward III. For his participation in the coup, Edmund was rewarded land belonging to both the Despensers and the Earl of Arundel; all three were executed.

Afterward, Edmund was given joint command of the Scottish Border along with Henry of Lancaster, with Lancaster eventually being given sole command.

During that same time, another daughter, Joan (my 20th great-grandmother) was born circa 29 September 1328.

After all the intrigue and side-switching, Edmund, understandably, became less popular with other nobles. Although he was still permitted to accompany Edward III’s wife Philippa to her coronation in February 1330, Edmund’s appearances at court became less and less frequent.

Edmund’s final child, a son named John, was born a few months after the coronation on 7 April 1330.

At this point, Edmund became convinced (by rumors spread by Roger de Mortimer) that Edward II was still alive. Edmund felt that Edward II was the rightful ruler. As such, he became involved in yet another plot to unseat the sitting English monarch. Eventually, the plot was uncovered, and in March 1330, parliament indicted Edmund of Woodstock of treason and condemned to death. Although he pleaded for mercy, neither Isabella of France nor Roger de Mortimer were willing to bestow it.

However, because Edmund was of royal blood, it was difficult to find someone willing to perform the execution. Eventually, a convicted murderer agreed to carry out the beheading in exchange for a pardon. Afterward, Edmund’s body was laid to rest in a Franciscan church in Winchester, England.

The execution of another royal greatly angered 17-year-old Edward III, who had not been informed of the decision. In October 1330, Edward III carried out a coup of his own, wresting control of his government from his mother and her lover. For his part in Edmund’s downfall and procuring his death, Roger de Mortimer himself was executed on 29 November 1330.  The charges against Edmund of Woodstock were annulled posthumously, and his body was reinterred in Westminster Abbey in 1331.