For four months now, I have been participating in the 2020 edition of 52 Ancestors in 52 Weeks. It has been both a challenge and a blessing. Some writing prompts have been harder than others: this week’s challenge has been one of the easier ones: Air.

When I was a child, I would lie in the grass, watching the birds float on air currents or flit from branch to branch and wished that I could fly like them. I would marvel at the contrails crisscrossing the cerulean sky, connecting one cumulus cloud to another. “Someday, when I am older, I will be a pilot, soaring above the clouds.” Of course, like many childhood dreams, this was one that never became real. But every once in awhile, all these years later, I still catch myself looking up and wondering, “What if?”

It seems that I am not the only family member who looked to the skies and wanted to fly. Leo Cecil Marshall (my spouse’s great-uncle) also longed to soar. Born 14 September 1921, in Mahaffey, Clearfield County, Pennsylvania, Leo Cecil Marshall was the son of Ralph Cecil Marshall and Mildred Amanda Derrick. His elder brother was Harold Delmont Marshall, who was born on 16 September 1919.

On 26 March 1937, Leo’s father, Ralph Cecil Marshall, was kicked/trampled by a cow. For ten days, he was in pain. On 6 April 1937, Ralph underwent a cystoscopy and learned that he had a ruptured bladder. Immediate surgery was required. Sadly, less than two weeks later, infection set in, and on 18 April 1937, Ralph Cecil Marshall succumbed to peritonitis and gangrene. He was only 42 years old.

However, the family did not stay in this meager home for long. On 14 February 1942, Leo Cecil Marshall registered for the World War II draft; his mother was listed as his next of kin and their home as 122 Bouck Street in Tonawanda, New York. At that time, 20-year-old Leo was working at Durez Plastics & Chemical Company on Walck Road in North Tonawanda, New York. (The draft card also noted the Leo was 5’8″ tall and had black hair and blue eyes.)

A few months later, on 28 July 1942, Leo Cecil Marshall met with a recruiter in Buffalo, Erie County, New York, and enlisted in the newly formed United States Army Air Forces “for the duration of the war or other emergency, plus six months, subject to the discretion of the President or otherwise according to law.”

For three years, Leo trained at various Army air bases in the United States before being commissioned at Albuquerque, New Mexico in February 1945. He was then sent to Boca Raton Field in Florida for several months as a bomber-navigator before transferring to Texas for reassignment overseas. However, orders changed, and in early July 1945, Leo Cecil Marshall was reassigned to Pueblo Army Air Base as an instructor.

The Pueblo Army Air Base was built in 1941 to serve as an advanced flying school for training four-engine heavy bomber crews. Starting in mid-1943, the command began training B-29 Superfortress squadrons. The first B-29 groups were deployed in December 1943 to airfields in India for bombings of Japan, dubbed Operation Matterhorn. The second B-29 combat command was formed in March 1944 with its combat groups deploying to the Mariana Islands in the Western Pacific beginning in December 1944.

Leo Cecil Marshall had been at the Pueblo Army Air Base for less than a week, when in the late morning of 8 July 1945, he boarded a B-29 Superfortress, piloted by John R. Simpson from 237th CCTS (Combat Crew Training Squadron). As this was a combat training flight, a co-pilot, bombardier, flight engineer, navigator, radio operator, radar observer, right gunner, left gunner, central fire control, and tail gunner were also aboard.

Around 12:30 p.m., approximately 26 miles southeast of Pueblo, Colorado, the weather changed (whether it was rain, fog, lightning, or high winds is unknown). Regardless of the cause, the result was the same: the B-29 Superfortress (serial #44-86315) crashed; all on board perished. Official reports indicate that 13 people died, so either another passenger/instructor was on board or someone on the ground was killed. (Between 1942 and 1945, an estimated 15,000 servicemen died in 22,000 training flights before ever seeing battle. In Colorado, New Mexico, and Arizona, where most of the training took place, crash numbers were especially high. In the span of two years, approximately 300 bombers, fighters, and training planes crashed along the Front Range.) 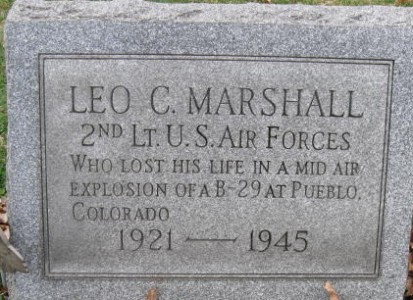 The next day (Monday, July 9), the War Department sent a telegram to Mildred Ross, delivering the news that no mother wants to ever hear: Her son was dead. Also grieving was his wife Louise, who was four months pregnant with their only child.

Heart-broken, the two women buried Leo Cecil Marshall in Oak Hill Cemetery in Curwensville, Clearfield County, Pennsylvania. Although I know that they must have wished that Leo could have remained with them on earth, I hope they took comfort that he was “off flying” with the angels.

Oh! I have slipped the surly bonds of Earth
And danced the skies on laughter-silvered wings;
Sunward I’ve climbed, and joined the tumbling mirth
Of sun-split clouds, — and done a hundred things
You have not dreamed of — wheeled and soared and swung
High in the sunlit silence. Hov’ring there,
I’ve chased the shouting wind along, and flung
My eager craft through footless halls of air.

Up, up the long, delirious burning blue
I’ve topped the wind-swept heights with easy grace
Where never lark, or even eagle flew —
And, while with silent, lifting mind I’ve trod
The high untrespassed sanctity of space,
Put out my hand, and touched the face of God.