To quote Britney Spears, “Oops, I did it again!” I missed Week 33 of the 52 Ancestors in 52 Weeks writing challenge. Darn it! And last week’s writing prompt was a really interesting one too: Black Sheep. I would really hate skipping that. At the same time, I find this Week 34’s challenge, Chosen Family, quite intriguing. I wonder… What if I combine the two challenges into one? Is there a family member who was both a “black sheep” and had a “chosen family”?

Yes, there is. But before I introduce this black sheep/chosen family individual, let me tell you a bit of backstory first…

My full, true and correct Christian name is Joseph Ephraim. I was born in Franklin County, Pennsylvania, near Chambersburg. My mother was Mary Ferguson. I was born to her before she was ever married, and she then married one William Taylor. He died and then she married one Joe Carry.

(As Joseph Ephraim is the fourth of five known sons born to William and Mary Taylor, the statement that he was illegitimate is incorrect. On 23 September 1850, William H. Taylor (age 40), Polly (age 42), William F. (age 20), Samuel (age 16), James (age 7) Ephraim (age 5), and Jeremiah (age 6 months) were residing in Washington Township, Franklin County, Pennsylvania. Also, Mary Ferguson died in 1886, seven years before William. William is buried next to Mary in Scrabble Cemetery, Berkeley County, West Virginia. There is no evidence of a Joseph “Joe” Carry ever living in Berkeley County, West Virginia or Franklin County, Pennsylvania at the time, let alone being married to Mary (Ferguson) Taylor.)

I never had a sister of whole or half blood. One half brother was James Taylor, one  John Taylor, one Samuel Taylor, one Zachariah Taylor, and one Jeremiah Taylor. John and Jeremiah died, I know. These boys are not my half brothers but step brothers. Mother married Taylor when he had these boys. Mother had no children by Carry.

(As far as the records show, all five known boys (and possibly the two others who do not appear in records) are the natural children of William and Mary Taylor. None of these boys are half-brothers or step-brothers of Joseph Ephraim; they are his full brothers.)

Anyway, when I was just a lad, I left Pennsylvania, probably I was about 12 years old, left all those Taylors and Carry and mother there in Pennsylvania and never saw or heard from or of thereafter. I went to Berkeley County, Virginia near Hardscrabble. John Shuck or Shook went with me. He was older than I. Geo and John Holliday; Jim Greenwood, a shoemaker; Ulery Sites, a shoemaker, I knew around Hardscrabble, and I worked for these Holidays. John Holiday had a son John. I do not know whether Geo. Holiday had children. Old Man Peter Gardner, who was a wagonmaker and who had sons Allen and Morgan, and there was a blacksmith, Jim Moore, there I knew. This man Shook got away from there, and I never learned what became of him.

The Civil War had not broken out when I left Pennsylvania. I never knew the name of my father, never heard who he was. I have it in my mind that I was born in January, but I do not know the day or the year. I worked at farm work before I enlisted.

(Again, just in case there is a doubt: Joseph Ephraim’s father was William H. Taylor.)

I was there about Hardscrabble all during the early part of the Civil War. They got a good many men there in Berkeley County, Virginia to fill up old company C 3 W. Va. Cav., and I joined and served in said company. There were just a few of the old company left; they did not have a Capt. Even and they took Peter Tabler, a preacher, don’t know the denomination, as Capt. of this company C. I knew him before I enlisted. Tablor was a tall, slim man with dark hair and eyes; he was a dark-complexed not man.

I told them there at Martinsburg, West Virginia., told Bill Kneedler who was taking the names of these new men for the said company C and who was expecting to be a Lieutenant in the company and I believe he got to be that, that my full name was Joseph Ephraim Taylor but he left off the Joseph and put it just Ephraim. I had always been called Joseph, or Joe.

(As a child/teenager, all records refer to him as Ephraim, not Joseph or Joe.)

I knew this Kneedler there in Berkeley County before our service and saw him there in Berkeley County before our service and saw him there after discharge. Bill Kneedler was a low, heavy-set fellow with red cheeks. I think, know almost, that he had dark hair. Don’t know color of his eyes. He was a farmer. Besides Kneedler, I knew before enlistment a son of Capt. Tablor, no it was a nephew of Capt. Tablor, who tried to get in but who was not accepted because he was young and small. John, Dave and Isaiah Kiserr, I knew no more of the company than these before enlistment, but I remember comrades Alex and Ed Horner, John Wise, Henry Slater, John Dilly, Bill Freshower, Hiran and Charles Cochran, U.S. Davis, John Stafford, Andrew J, Shrout, Mose Vulgernut, Stone King (they called him that; he was kinda rattle-brained), Ed Wagle (who was a Sgt.), Bill Butt or Butts, Dave Butts or Butt (don’t know whether the Butts were kin, think they were a little), Adam Wolf, Stansberry Hudson or Rutson (who was a blacksmith), Bill McNabb (who was missing, we supposed he drowned), Ezra Yoho, Falkenstine (was company quartermaster but I do not recall his given name, think it was John).

(Sadly, considering how much detail he provides about the other soldiers in his company, it is evident that Joseph Ephraim Taylor/Carry purposely omitted both of his brothers who served with him.)

He goes on for nearly seven more pages, detailing battles and people with whom he served, as well as how he got to Missouri. At the end of his testimony, when asked about why he never applied for a pension for military service before, his answer provided additional insight on his feelings regarding his blood kin:

None of the men of the company knew a thing about the name Joseph Carry. Another reason, and a big reason, for my not applying for a pension sooner was that I hesitated bringing the name Taylor into the family. I got so that I could earn nothing scarcely and concluded to apply and told my wife about the name Taylor. I had told my wife, long ago however, that I was a soldier in the Civil War.

The first time Joseph Ephraim Taylor appears in Missouri records under his pseudonym is on 25 October 1873, when Joseph Cary (one “r”) married Mary Rector in Franklin County, Missouri. Mary was the daughter of Lewis Rector and Sarah Warren. 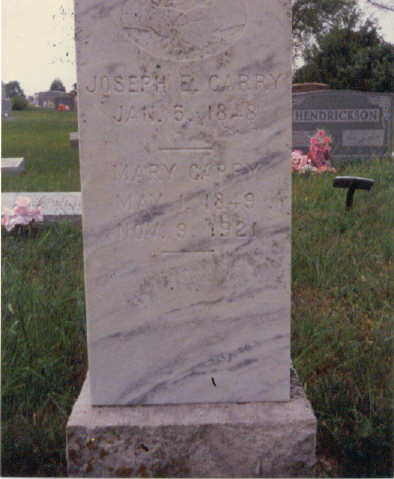 For the next several decades, the U.S. Census tracks the Cary/Carry clan across the state of Missouri. On 23 June 1880, the Carys (consisting of Joseph, Mary Ann, Elijah William, and Robert W.) were residing in Brushcreek Township, Gasconade County, Missouri.

Joseph Ephraim and his wife were married for 49 years until Mary’s death on 13 November 1922. He died seven years later on 28 December 1929 and was buried beside his wife in Licklider Cemetery, in Jake Prairie, Crawford County, Missouri.

So whether Joseph Ephraim Taylor/Carry was the black sheep of the family or just a lost lamb who went his own way, one thing is for certain: he left his old family behind and chose a new life with a new family, never looking back.