On this day, 31 December 1868, John Jacob Huffer, my 4th great-grandfather, passed away.

Three years after that, sister Magdalene Matilda Huffer was born on 5 November 1817.

Sister Sophia Huffer arrived the next year on 16 January 1818.

Brother Daniel Huffer was welcomed the following year on 14 December 1819.

On 25 May 1824, sister Lydia Huffer was born in Rohrersville, Washington County, Maryland

On 9 October 1831, about two years after their marriage, daughter Ruan Huffer was welcomed to the couple’s Washington County, Maryland home.

Amidst all of these glad tidings, sadness struck when Leah’s father John Blecher died on 10 November 1834, Washington County, Maryland.

A few months later circa 1835, John and Leah had another son, whom they named John, after his grandfather and father.

About a year after baby John’s birth, another son joined the household, Alfred Calvin Huffer, who was born on 8 October 1836.

Then, on 4 March 1839, tragedy befell the Huffer household when son John, who was only around four years old, died. Heartbroken, his parents laid him to rest in the Mount Hebron Cemetery located in Keedysville, Washington County, Maryland.

A year later, on 14 June 1840, another son named Jonas Quincy Huffer was welcomed to the family.

Two years later, John’s father, Rev. John Huffer, passed away at the age of 71 on 23 July 1842, in Rohrersville, Maryland. He was buried in the town cemetery.

Then, on 8 October 1842, John and Leah’s final child, Mary Catherine Huffer, was born.

On 21 November 1853, daughter Elizabeth Huffer wed Solomon S. Thomas (my 3rd great-grandfather). He was the son of George Thomas and Sarah Schlosser.

Several years passed without incident until 1 September 1858, when daughter Mary Catherine Huffer, just one month shy of her 16th birthday, died. The cause of her death is unknown. What is known is that a grief-stricken John and Leah Huffer laid their daughter to rest beside their son John in Mount Hebron Cemetery.

The next year, on 16 October 1859, approximately 20 miles away, John Brown and his Provisional Army of the United States took possession of the United States Armory and Arsenal at Harpers Ferry, West Virginia. The raid drew militia companies and federal troops from Maryland, Virginia, and the District of Columbia. On 18 October 1859, twelve Marines broke down the door of the Armory’s fire engine house, taking Brown and the remaining raiders captive.

Meanwhile, the nation was rocked when on 12 April 1861, a shot was fired on Fort Sumter in the Charleston Harbor, South Carolina. With that shot, the Civil War began. Nearly 500 miles away in western Maryland, sympathies were divided between neighbors and within families; some were loyal to the Union while others supported the Confederate cause.

Soon, the War Between the States would arrive on the Huffer’s doorstep. On 1 January 1862, the same day that John’s mother Elizabeth (Line) Huffer passed away in Rohrersville, Maryland, Confederate Major General Thomas J. “Stonewall” Jackson marched into Winchester, Virginia (less than 45 miles away) to disrupt operations on the B&O Railroad and the C&O Canal.
Four days later, on 5 January 1862, Jackson’s force reached the Potomac River opposite the garrisoned town of Hancock, Maryland. His artillery fired on the town from Orrick’s Hill but did little damage. Garrison commander Brig. Gen. F.W. Lander refused Jackson’s demands for surrender. Jackson continued the bombardment for two days while unsuccessfully searching for a safe river crossing. The Confederates withdrew and marched on Romney, Virginia (now West Virginia) on 7 January 1862. 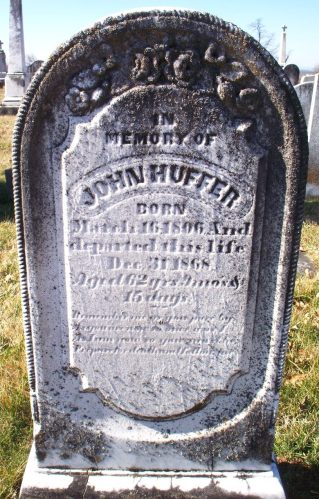 Meanwhile, Gen. Robert E. Lee, after invading western Maryland, marched on Harpers Ferry, Virginia (now West Virginia) on 14 September 1862. The Army of the Potomac under Major Gen. George B. McClellan pursued the Confederates to Frederick, Maryland, then advanced on South Mountain near Boonsboro. Pitched battles were fought for possession of the South Mountain passes—Crampton’s, Turner’s, and Fox’s Gaps. By dusk, the Confederate defenders, suffering severe casualties, were driven back. McClellan attacked Lee’s Army before they could regroup. However, McClellan’s limited activity on 15 September 1862, after his victory at South Mountain, allowed Lee time to unite his scattered divisions at Sharpsburg and capture the garrison at Harpers Ferry.

The new year heralded the abolition of slavery throughout America when on 1 January 1863, President Abraham Lincoln signed the Emancipation Proclamation.

Unfortunately, not long after this historic occasion, John’s wife, Leah (Blecher) Huffer, died at the age of 58 on 19 January 1863. She was buried in the nearby Boonsboro Cemetery.

For nearly six years, John lived his life without Leah by his side. Then, on 31 December 1868, John Jacob Huffer, age 62, died in Washington County, Maryland. His children laid him to rest next to his beloved wife.